The human impact on our planet is immense and extremely rapid. An increasing human population size has led to unprecedented changes in land use, pollution and climate1. Over half of humanity now lives in cities (over 80% in many EU countries), and this proportion, along with the surface of urban lands, is expected to rise continuously during this century2. Urban areas can impose strong selection pressures that differ from more natural areas including increased temperatures due to human constructions and the loss of vegetation (Urban Heat Island effect3), and green space loss and fragmentation by buildings, which results in an overall biodiversity loss and biotic homogenisation as few tolerant species will dominate biological communities4,5.

This poses an enormous challenge for all organisms living in these areas but also provides an opportunity as cities across the planet share many commonalities, making them widely replicated and valuable “natural experiments6,7 that test how relevant and globally-acting environmental changes affect not only ecological but also evolutionary processes8,9. Recent research in Flanders shows that decreasing species diversity, biomass and homogenization across cities is prominent in arthropods4,10,11. For spiders, urbanization is linked to an overall community-wide decrease of spider size, and altered energetic allocations into different components of web-building12. As a result, orb web spider communities in cities are dominated by smaller species, with species relying on smaller prey and webs for prey-capture. Such functional shifts were also found at the intraspecific level in the European garden spider Araneus diadematus10 with urban cross spiders being smaller, catching smaller prey using webs with a smaller mesh width. This species is particularly interesting as it not only demonstrates behavioural web-building adaptations to urbanization, but also is characterized by a continuous colour variation ranging from light yellow/brown to dark (red) brown and greyish black which likely plays a role in thermoregulation13. Moreover, this species is an ideal study species in an urbanization context as it is: 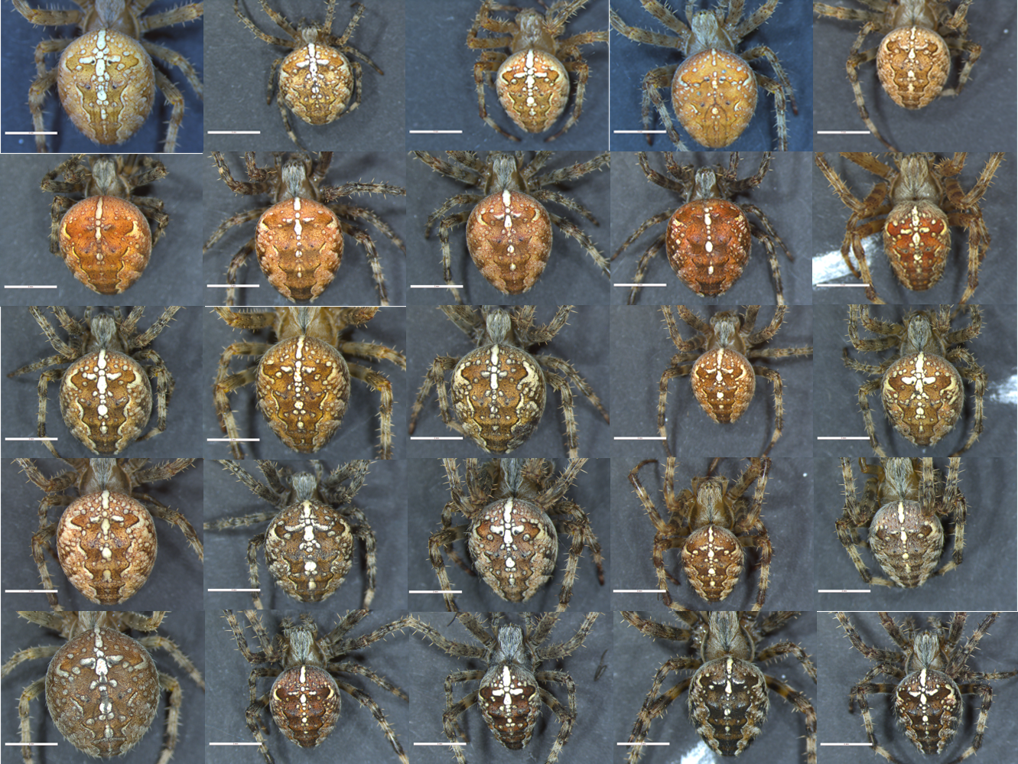 The European garden spider is one of the species of interest for the SPIN-CITY project which investigates the effect of urbanization on spiders using citizen scientists, in close collaboration with biologists. This project aims to further expand knowledge on web building behavior and investigates the effect of urbanization on spider colour (see info section). By taking pictures using the SpiderSpotter app and noting down web characteristics we investigate the following hypotheses:

Launched in September 2019, SPIN-CITY has mainly focused on Flanders (city of Ghent) (see map). Now, almost one year later, we would like to expand our research efforts and are looking to establish a large scale research network of collaborating scientists. By replicating across cities we will not only get an in depth understanding of the effects of urbanization on spider colour and web building, but this will also allow to determine which city characteristics (size, habitat connectedness,…) and to what extent latitudinal effects play a role in selection strength.

If you are interested in collaborating on this research project, you are most welcome to contact us at This email address is being protected from spambots. You need JavaScript enabled to view it.. We will get back to you as soon as possible to discuss further arrangements including sampling protocol and answer any questions. In the meantime, have a look at our presentation about the project! In addition, you will be able to register for an online meeting at the end of August where we will give more background info on the project, present preliminary results and further streamline research efforts. Of course, project development will be dependent on the evolution of corona measures and we will evaluate the country specific conditions at the end of August as well.

The strength of the research network lays in sampling a large number of cities across Europe. Field work will consist of taking spider pictures using the SpiderSpotter app (see …) and taking web measurements: length of the capture spiral and number of crossing threads which gives an estimate of the average mesh width. Sample locations should be selected to represent a varying level of urbanization (rural, suburb, city centre). For a subset of cities, collaborators will be asked to collect live spiders to be analyzed at UGent.Location coordinates are automatically registered through the app. Sampling number will depend on city size and specific urbanization characteristics, but we aim to collect between 100 and 150 observations observations per city. This normally takes 2 – 3 days to achieve. The SpiderSpotter app serves as the primary input tool, but also as the central database for spider/web and location data (coordinates), so there is no need to individually transfer data. 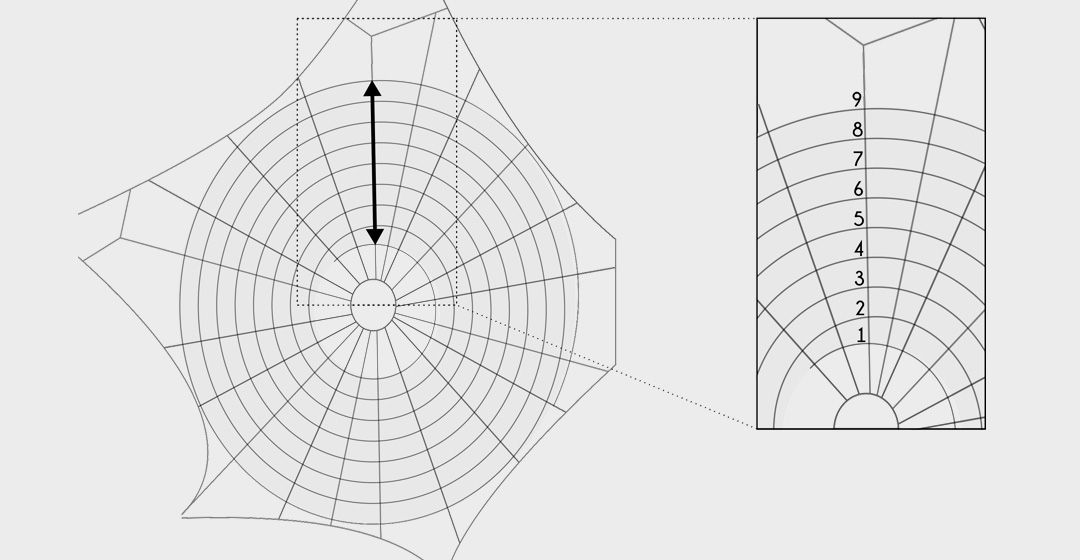 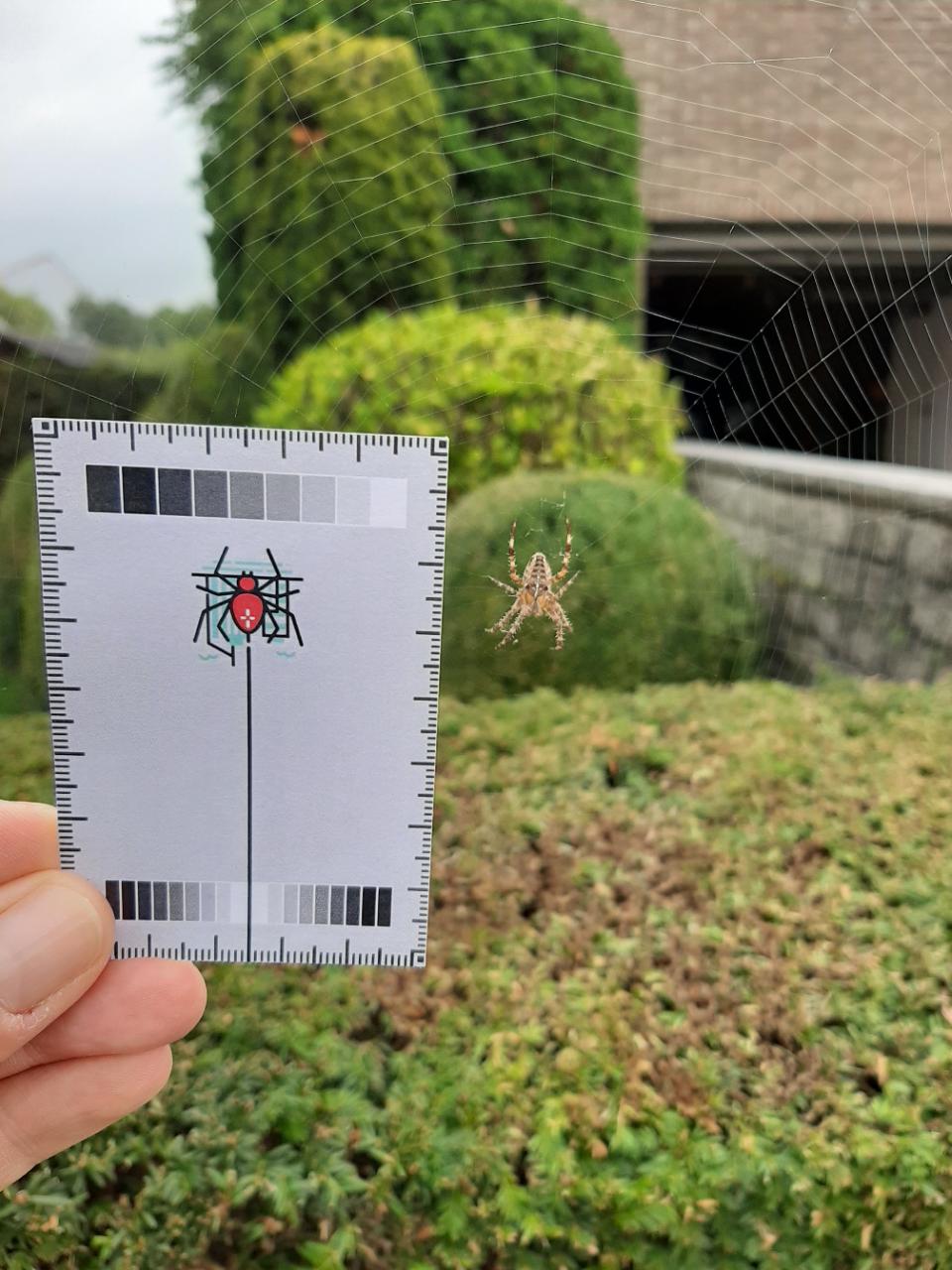 Researchers at UGent will perform all the subsequent data analysis that will consist of:

What do you get in return?

Individuals or members of a team that perform field sampling (taking spider pictures + web measurements + sending of spider samples (in some cases)) will be considered full collaborators and will be offered co-authorship on papers resulting from the collected data. All data will be open and publicly available. We will soon provide more information on authorship and data policy.